It's not everyone who can say that they have helped a queen start a pig farm in Africa.
But Laura Adams of Mobile, Alabama can.﻿

On Mel's second trip to Ghana, Manye (Queen Mother) Mamiyu (who is also Mel's much-loved African mother) asked whether Mel might be able to help her buy a few piglets so she she could begin a piggery. Since piggeries regularly produce sustainable incomes in Ghana, Melody liked the idea. But since all of her own resources were tied up in Soul of Somanya, and since starting a pig farm falls outside of Soul of Somanya's charter, she knew she couldn't help. However, after thinking for about two seconds, Melody realized that this was an idea that might appeal to friend and Soul of Somanya supporter Laura Adams. Sure enough, when approached with the idea, Laura wanted to help. All she asked in return was to some day receive a photograph of Manye Mamiya and the new Somanya piggery.

Bernard presents the first piggery donation to Manye as her spokesman looks on
Bernard presented the piglet money to Manye some days later. A few weeks after that, he accompanied her to  the place where she was "boarding" her first two piglets. Upon learning that Manye had land but no means to build a pen, Laura stepped up once again and loaned the money for the pen to be built. 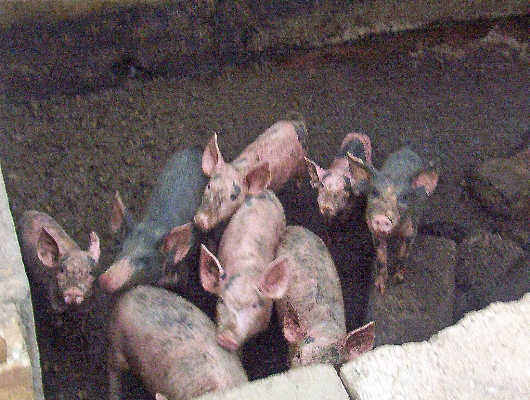 Francis Bacon (far left) and Dashiell Hammet (rear second from right)
Meanwhile, Laura has been wishing she could go visit the piglets in person. But for the time being, she'll just have to be satisfied with pictures...and local substitutes. 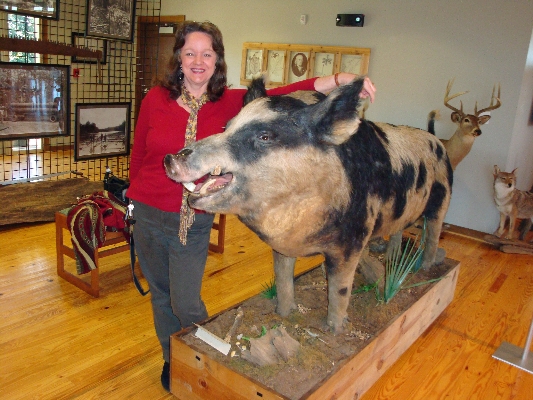 Laura and a surrogate pig...just until she can go see the ones she co-owns.
2010 Piggery Pics

On Mel's last trip to Ghana, her Mom, Manye Mamiyu, spent a fair amount of time at Soul of Somanya Ghana's place of business. She took to dropping by fairly often in the mornings to chat with Mel and to admonish the artisans to work hard and save money so that they could continue their educations. Manye told how she had been denied that privilege by her father, and how it has always been her biggest regret. 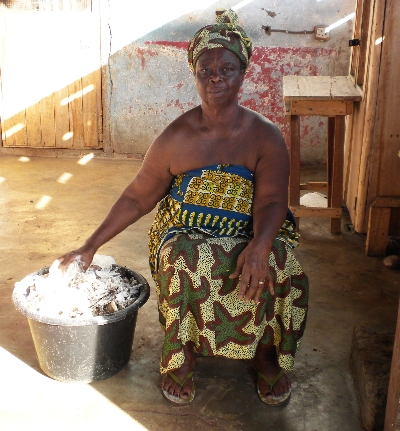 Manye posing for Laura's picture.
Then, one day, she took Mel and metal-smithing teacher, Kathie Power Johnson, to see the much-improved piggery. Despite a tragically disappointing beginning, when all but one of the first litter of piglets died (along with their mother), Manye's  piggery now boasted seventeen animals of varying sizes and ages. 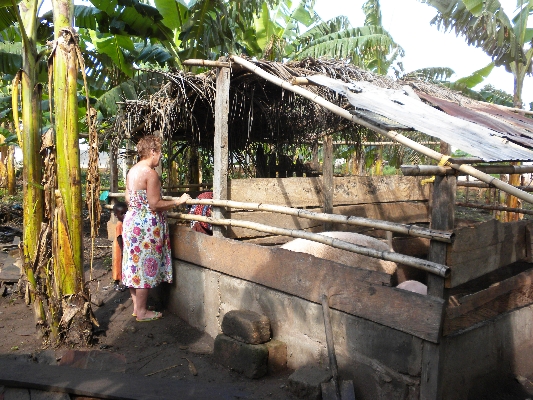 Kathie Power Johnson, guest teacher, observing the goings-on at the piggery.
Mel was very impressed when she witnessed her very dignified African mom mixing up a nutritious dinner for her livestock, literally up to her elbows in pig slops. Clearly, this remarkable woman is not afraid to get her hands dirty...or to work hard. It was a fine example of the work ethic upon which Soul of Somanya is based. 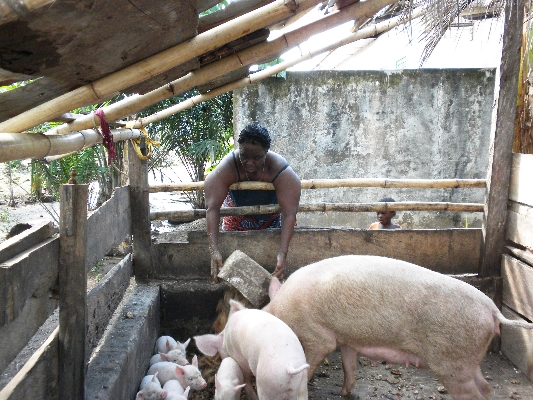 Manye Mamiyu feeding her pigs.
Later, Manye asked Mel to take a posed photo of her to give to her benefactor, Laura. She gave Mel a full report of how the money Laura had invested in the farm had been spent, how many piglets had been born, and what the outlook was for the near future. She then asked if Mel liked pork, offering to slaughter one of the pigs and treat the Americans to a feast. Mel declined, not wanting to lessen the earnings of this successful, but still a bit tenuous, venture. 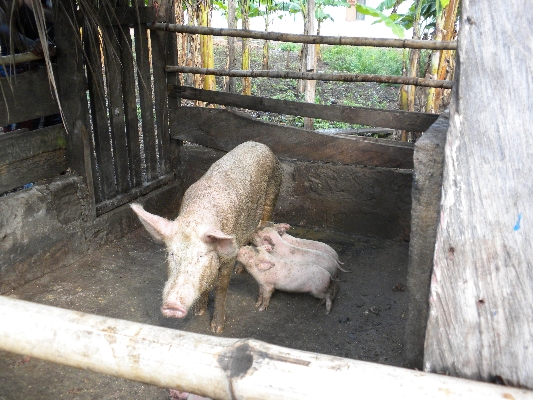 One of two recent--and thriving--litters of piglets.
Manye Mamiyu has been a good friend to Soul of Somanya...and to her people. Her daughter Mel misses her very much...in fact, every day!