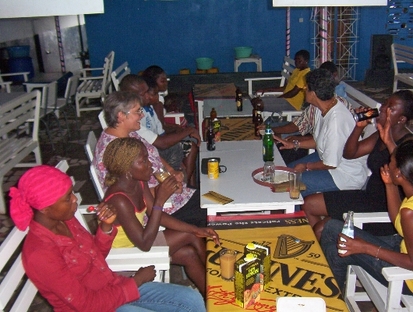 Well, Helen and I are back in the U.S. Neither of us was quite ready to come home -- Helen's just about as hooked on Somanya now as I am. But there's so much work to be done here to get this project the rest of the way off the ground, and the next phase requires my presence and energies here.

I decided not to inflict my incoming culture crash on my friends and co-workers this time. I had a very rough landing last time, and they were very patient with me, but I wanted to spare them having to go through it again. So I'm staying at my sister's house in Chattanooga for a few days. I plan to return to Mobile on Monday, and I'll be hitting the ground running.

Bernard and I are extremely happy with the progress made by our workers in the three short weeks we were all together. In the last two days, especially, everything really started clicking, with everyone gaining confidence in their skills and fine-tuning their workmanship. We ended our last work session with a party at our neighborhood bar/cafe. There was a lot of music and laughter and dancing. It made for a happy note on which to end our stay.

Packing was a challenge, but we ultimately brought home a lot of absolutely smashing jewelry and key chains and fan pulls, not to mention I don't know how many pounds of beads -- enough that we had to ask Bernard to wait outside the airport doors until we'd passed through baggage weigh-in, just in case we needed to send some of them back to Somanya with him. But we passed.

The goodbye was hard for me. I don't know how long it will be before I can go back, and I already miss my friends in Somanya, especially Bernard. I've gotten so used to him being right there, always ready with his wise counsel when I get bogged down in cross-cultural confusion, so sensitive and attentive to our needs and wants and feelings, his humor adding so much fun and flavor to the mix of impressions and reactions and emotions that now make up my sense of Africa. It would be a very different place for me without his presence there. I only hope I can learn enough from him to be able to continue this project without him when, as will inevitably happen, he moves on to other things some day.

But that's for later. What lies immediately ahead is the part he can't help with; the part I find most daunting -- the marketing here in the U.S. I'm trying to school myself to think of it as an exciting challenge. I'm trying to keep faith that the help we need will appear when we need it, as it always has with this project. I'm trying to stay open to that help in all the many unexpected forms it may take; to stay alert enough to recognize it, quick enough to grab it, strong enough to hold onto it, and sensitive enough to nurture it. But I'm scared. The ante is so much higher now that eight people are counting on this project for a steady, ongoing source of income that has the potential to transform their lives, the lives of their present and future families, and, to a lesser extent, the welfare of an entire community.

But there are a few things I've learned from this project, important things, I think. I've learned that fear evaporates when you turn and run straight at it, so that's what I'm going to do again this time. I've learned that when you ask for things for the right reasons, help appears. And I've learned -- or rather relearned -- that when individual people commit to pooling their good intentions and resources, they truly can change the world. I'm one of the fortunate ones in having had the opportunity to see that happen first hand. I thank each one of you for that.