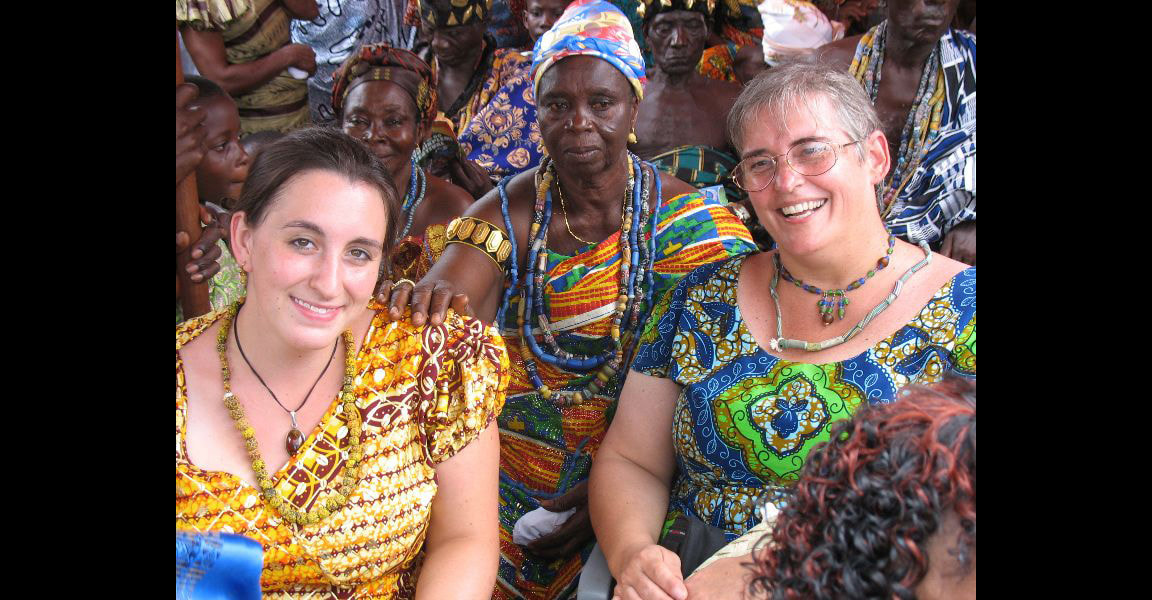 I'm sorry to have been out of touch for so long. But just after our return from Africa, we lost one of our three Ghanaian partners due to trust and ethical issues. Since he had been the instigator and our main contact in Somanya Krobo, there was some very real doubt for several weeks as to whether we would be able to continue the project.

It was a time of great stress for us. After all the many difficulties we'd had getting the bead makers of Somanya to trust us, it would have broken our hearts to have been unable to carry through on our commitments to them. But after a frenzied scramble that was seriously complicated by the difficulties and expenses involved in communicating with a developing country, Arkuh Bernard Tettey, the elder of our two remaining partners (he's 26), has declared himself willing to take on the extra duties. It's a huge commitment for him to make. He has my respect, admiration and gratitude for making it.

Meanwhile, back in the U.S., Megan and I are working hard to get her back over there to shoulder some of the load during this all-important start-up phase of the project.

In many ways, this is the most difficult phase. For it to succeed, there is a great deal to be done rather quickly, but it's the usual catch-22. Most start-up grants require a provable track record of production, but getting that track record requires start-up funds. So, as usual, we're going forward on faith. I am spending all my spare time exploring grants and other fund raising possibilities and getting the jewelry prototypes ready for photographing, so that I can get our first catalog designed and printed. Megan is working two jobs in order to save the money for her living expenses during her upcoming stay in Ghana. We are looking hard for a bargain flight, as well. We got lucky last time, with Megan getting the use of someone's buddy pass and a friend donating to me some transferable frequent flyer miles she knew she'd never use. We're hopeful that something similar will turn up this time.

In the meantime, Bernard and our youngest partner are struggling to coordinate our first large order of beads from a local clothing producer in Ghana. Up to now, they have been doing this with no capital at all, which has meant that they have had no money for transportation, telephone credit or internet café charges. This has made an already difficult job much harder for them, since business transactions that might otherwise have been handled with quick phone calls have required long, hot, dusty walks instead. As of this week, however, thanks to a donation by a generous friend, we will be able to send them some expense money. This will lighten their load enough that they should have time to begin researching prices on renting a building to be used for production, training, bead storage, office activities, and local retail selling. Rents in Somanya Krobo are very cheap by our standards -- between $900.00 and $1,500.00 per year -- but they do have to be paid in full up front. Moreover, once we find a building, chances are good that we will have to build a privy. We'll also be looking for a computer, preferably a laptop that won't cost an arm and a leg to ship, as well as a printer and a surge protector. So if any of you are upgrading your computer equipment in the near future, and if you'd be willing to let your old equipment go for bargain prices, please let me know.

I find that I miss Ghana more than I thought I would. Memories of the heat, the lack of running water, and the oiliness of the food -- never all that important -- have receded. Instead, I remember the lush beauty of the local foliage, the brilliant parade of colorful fabrics on the streets, the cheerful cacophony of music and chatter in the marketplaces, the satisfactions of teaching and learning together under the trees and, most of all, the open, friendly smiles of the people.

I wish I were the one going back. But I can be of more use here for now. Maybe in the fall…. 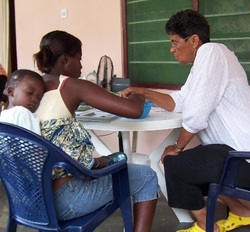 Well, the Soul of Somanya Ghanaian bead makers’ project is about to take an important leap forward. Since my niece decided to go back to school instead of continuing with the project, I’ve booked a flight to go back to Africa myself, and will be leaving on June 1st, along with my friend and fellow beader, Helen Sigler, who has brought me back from the brink of complete overload-panic by signing on as a full-time volunteer. She’s already shouldering part of the load, for which I am so far beyond grateful that I am completely at a loss to know how to express it.

Meanwhile,  on the other side of the Atlantic, we have lost yet another partner due, once again to trust issues. Bernard, on the other hand, has proved his trustworthiness beyond any reasonable doubt. He has been working tirelessly, doing the jobs originally designed for three people with almost no assistance or financial support of any kind. Somehow he has managed to keep the Soul of Somanya bead makers committed to the project throughout what must have seemed to them like a very long wait.

He has also found and begun training a new production workforce of six (so far) local youth. These young people have precious few employment options, so this is a very big deal for them. They are eagerly awaiting my arrival with the first round of orders for our products so that they can begin working for a living wage.

Thanks to two mind-boggling donations by some generous people I had never even met, I was able to give Bernard the go ahead to begin looking for a suitable work-space in Somanya. He has managed to find and negotiate an amazingly favorable two-year lease on a small house that sounds perfect for our purposes. We now have enough space for training, production, storing supplies, a tiny office/retail shop, and a one-room living space for Bernard, whose occupancy was stipulated by the landlord as a security measure. This single room also represents the only form of payment we have been able to offer this young man for the ten long months he has been working under, at times, very stressful circumstances.

On this trip, Bernard I will be making our final decisions about which bead designs we will be using for our products. We will then begin placing bulk orders for them, so that we will have in stock all the materials we need to produce on demand, without the delays that plague anyone in Ghana who is trying to do anything whatsoever on any kind of schedule. Since we intend to pay market (not wholesale) value for the beads we buy, these purchases will be the beginning of the enhanced income I promised the bead makers at the end of my last trip. And since I will finally be starting to fulfill my tentative promises to them, I will be able to begin breathing once again.

Before I went to Ghana the first time, a great many people donated their time and muscles and money to make the first phase of this project possible. As the date for my departure approaches, the same thing has begun happening again. In the middle of these financially troubled times, my amazing community of family, friends and well-wishers have once again been offering their support in various forms. I am touched by, and inexpressibly thankful for, your generosity.

You'll be hearing from me soon!